Hi all! I am Izzy, I am reprinting a post from my blog to Ready To Work’s blog. Initially, I was going to talk about what my blog means to me, but I feel like this issue is more important than that. The topic I will be addressing is the concentration camps in China. 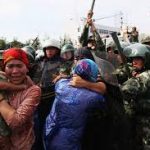 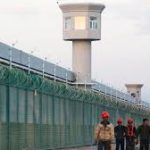 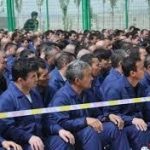 Uighur detainees in a camp in Lop County, Xinjiang, in April 2017.

For several years, China has been carrying out cultural genocide, which is the extermination of certain people’s ideas and beliefs. The people in this cultural genocide are Uighurs and other Muslim minorities. There are over one million people detained in these camps. The Uighurs are a Turkish-speaking minority group that primarily lives in Central and East Asia. They target and detain these Muslim minority groups even though they are citizens. There are nearly 400 internment camps in the Xinjiang region (the far west region in China).

The categories that define genocide are; killing, causing serious body or mental harm, deliberately inflicting conditions of life to bring about the group’s physical destruction, and imposing measures intended to prevent births within the group forcibly transferring children from their families without consent or valid reason. These camps have all of those categories going on. There is an overwhelming amount of evidence that the Chinese government deliberately set up these camps to depopulate and exterminate the Uighur people. We will get into all of this in the following paragraphs.

These camps provide forced labor and re-education. Of course, just like the concentration camps during World War II, they are facing harsh conditions. The people in these camps are being raped, abused, tortured, and even killed. Survivors of these awful conditions have reported being subjected to electrocution, waterboarding, stress positions, repeated beatings, and injections of unknown substances.

A specific survivor of the camp is Sayragul Sauytbay. In the Business Insider, they say Sayragul reported, “Sayragul also described horrific conditions during her detention, including inadequate health care, crowding, and almost nonexistent hygiene. Prisoners who were observant Muslims were forced to eat pork, a food that’s considered haram, or forbidden, in Islam.” In Christianity, eating pork is like being greedy. In Christianity being greedy is a sin.

Sayragul also had more to say about her experiences in these camps. She said that there were about 2,5000 prisoners at each camp ranging from 13 to 84.

She went on to talk about the punishments at these camps. She said in the Business Insider, “They would punish inmates for everything,” Sayragul told Stavrou through an interpreter, “anyone who didn’t follow the rules was punished. Those who didn’t learn Chinese properly or who didn’t sing the songs were also punished,” she said. The people are bombarded with a language and traditions they don’t know and are expected to be able to know and perform it. If they don’t know or perform it, they are punished. Punishments could be anything from being deprived of food to having one’s fingernails ripped out, or worse.

For me, that isn’t even THE WORST thing they did at these camps. Sayragul went on to describe being forced to witness gang rape while at the camp. She told us there were multiple times she had to undress in front of 200 prisoners and confess her sins. In one instance, she was raped by several police officers. Sayragul confessed in the same article, “While they were raping her they checked to see how we were reacting. People who turned their head or closed their eyes, and those who looked angry or shocked, were taken away and we never saw them again.” They want you to be happy while you are being raped? If you aren’t you will most likely die! We need to stop this inhumane act. The final issue she touched on was forced abortions if somebody got impregnated by rape in the camps. Ruqiye Perhate, a 31-year-old woman, was one of the multiple women who reported having an abortion at the camp. She had an abortion TWICE after Chinese guards repeatedly raped her. There also may be more rape reports due to so many people still in the camps and some who are too afraid or passed on before getting to share their story.

These camps are designed to cause serious physical, psychological harm, and to mentally break the Uyghurs and Chinese Muslims. The Chinese government has said in their orders, “break their lineage, break their roots, break their connections, and break their origins [and] round everyone who should be rounded up”. They are also systematically preventing Uyghurs from giving birth. In 2017, the Xinjiang government issued a special campaign to control birth control violations. Also, according to the National Interest, “By 2019, the government planned to subject over 80 percent of women of childbearing age in southern Xinjiang to forced intrauterine devices (IUDs) and sterilization. The goal is to achieve “zero birth control violation incidents.” [The Chinese] government documents reveal a campaign of mass female sterilization supported by state funding to carry out hundreds of thousands of sterilizations in 2019 and 2020. This goes far beyond the scale, per capital, of forced sterilization inflicted on women throughout China under the past one-child policy.” Just let that sink in. For them to implement these policies the government employed a “dragnet-the” investigation to track down women who can give birth. Once they are attained, the women have to undergo forced sterilization, if not they will have to suffer the brutality and the abuse on their bodies and minds of the camps. When they are captured the women have to face unconsented injections, abortions, and unknown drugs.

Statistics show all their tactics of extinction to the Uighurs are working. The population growth rates in the Uighur heartland has plummeted by 84 percent.

When talking about this monstrous act, the Chinese government has condoned it. China’s communist party has suggested the Uighurs have “been infected by unhealthy thoughts”. And when a reporter asked will they ever be freed they stated, “Freedom is only possible when the virus is eradicated.” They aren’t talking about the pandemic, Covid-19, when they say, “the virus”. They are talking about the religion, customs, and traditions of the Uighurs. The government has also said, “If you were careless and caught an infectious virus like SARS, you’d have to undergo enclosed isolated treatment. Because it is an infectious disease.” These direct quotes from the Chinese government sound a lot like Hitler when he said, “Anyone who sees and paints a sky green and the fields blue ought to be sterilized.” This quote is saying if you are different, you need to be cleansed of this difference. Furthermore, several majority-Muslim countries including Saudi Arabia, have defended China’s methods.

Unfortunately, the mainstream media here in the U.S refuses to talk about the problem going on. The National Interest said, “What makes this genocide so uniquely dangerous is its technological sophistication, allowing for efficiency in its destruction and concealment from global attention. The Uighurs have been suffering under the most advanced police state, with extensive controls and restrictions on every aspect of life—religious, familial, cultural, and social….Over a million Han Chinese watchers have been installed in Uighur households, rendering even intimate spaces subject to the government’s eye.” Technology has its positives and negatives. The government in China is using technology negatively and to cover up the fact they are doing such heinous acts. So, I am going to use technology for good and inform people about what is happening.

Now all this is for nothing if you don’t help out. There are multiple things you can do to play your part in stopping this. One way you can help out is by signing petitions. There are three petitions I took the time to find: which are: Stand Up For The Uyghur Muslims in China, Petition for the Immediate Release of Professor Rahile Dawut and Other Uyghur Scholars, and Tell Congress To Put Pressure on China To End The Uighur Concentration Camps (they are all hyperlinked). Another way you can help is by donating if you can. You can donate to the Uyghur Humans Right Project, which is fighting for the release of the Uyghur people from the camps and much more unfair treatment towards them. The final way you can support this cause is just by talking about it. Spread the word. The more people that know, the better! If the mainstream media refuses to shed light on what is going on, we can! This is history repeating itself and we have the power to change this.

Have a great night, morning, or day (depending on where you are) everybody. I want to thank Ready To Work for allowing me to write a post for them. If you want to see more content like this you can visit my blog where Hawa (the co-founder/writer on the blog) and I post at least once every month (usually twice a month) content like this. My blog is called The Sad Reality Nobody Talks About (it is hyperlinked) and I address life as a METCO student and injustice stories of minorities.

< Back to RTW Blog